Lily and Lyla with their ‘smash friends’

With the cake smash craze now sweeping the UK. Balloons and a simple cake now seem a distant memory for a babies first birthday.

Originally from the US, a cake smash is, put simply, where a one year old is given a whole cake to ‘smash’ with their hands and eat, the moment is usually captured by a professional photographer.

Lara Mason of Tasty Cakes by Lara Mason decided to go one step further by re-creating her twins in cake and filming the four of them together ‘smashing’ cakes! 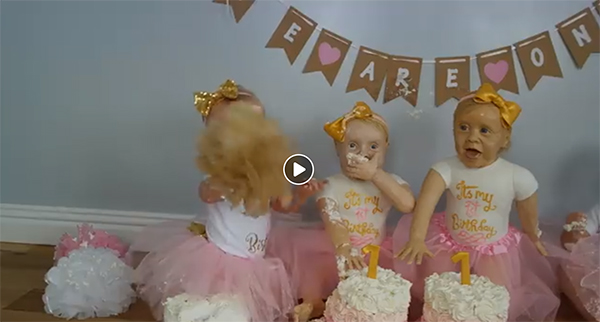 We love the video of the twins and their friends

It took Cake Life a while to figure all of these pictures out, let us know if you were the same!

We chatted to Lara about her amazing project:

Q. How long did it take you to recreate the twins?

I’d say about 100 to 120 hours over the last few weeks. Most of that time goes into the decorative icing pieces, so the cakes themselves I’ve been rushing to get done over the last week.

Q.  Are the twins cake with internal supports?

They are made up of 22 6 inch round madeira cakes and 4kg of buttercream As well as 3kg of fondant icing and 5kg of chocolate. That’s 44 eggs, 2.2kg flour, sugar and butter just for the cakes! The hair is made out of pulled sugar so i had to make every individual strand separately, I’d say that was the hardest part.

Q.  What are you going to do with the twins?

I haven’t decided yet! They took a bit of a beating with the girls while they did the cake smash, but I 100% won’t be able to bring myself to eat them!

All Cake Life can say is WOW Lara!

Pic above right: Lara and Nikki Mason with their twins Lily and Lyla