This story follows Julie Rogerson’s experience from creating a display cake for the Paul Bradford Pro Members’ Christmas display through to her own amazing achievements.

In June 2016, I saw an advert asking for Pro Members to participate in a Christmas themed student display at the November 2016 Cake International Show in Birmingham. I applied and was lucky enough to secure the opportunity to make a ‘Santa Face’ cake, based on a tutorial from Paul’s Christmas Cake book. We were encouraged to enhance and put our own spin on the original design.

A separate private Facebook group was set up for members of the display team, to enable us to ask questions and support each other in the run up to the show.

The support from Paul, David, Michelle and the rest of the Pro team involved in the display was amazing, which spurred me on to enter my own personal piece at the competition too. I thought since I was already taking one cake, I may as well take two!

Over the summer I practised my ‘Santa Face’ cake, much to the amusement of my family….”Christmas cakes in summer?” but they did enjoy eating the practice cakes nevertheless!

I decided to change the hat and beard from the original tutorial, to make them more detailed and also made advent boxes to decorate the board, filling them with homemade chocolate Christmas shapes.

Once happy with the design, I ordered a custom made dummy cake from Dummies Direct, so that I could work on it in advance of the show as well as keep it afterwards. 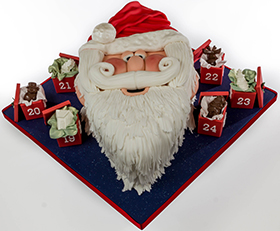 With great excitement, I worked on both my Christmas display piece and my personal competition entry in the run up to the show.  I used the skills I learnt in the Rhu Strand ‘Pirate Princess’ tutorial to help me make a figure of The BFG sitting on an open book for my personal entry in the Decorative Exhibit category.

As the show date approached, we shared progress pictures with each other in the private Facebook group. No matter what time of day, there was always someone in the group ready to offer advice, encouragement or generally just keep each other going! It was such a supportive environment, which was one of the best parts of being involved!

As the show rapidly approached, we arranged time slots to drop off our cakes for the table. Paul, David and Michelle were there to greet us and show us where to put our pieces. There were lots of live feeds to Facebook, enabling us all to see the display taking shape over the course of the day which was brilliant to see.

I dropped my personal competition entry off on the Friday morning and then went for breakfast before the show opened!

Our Christmas display table received lots of attention and praise from visitors to the show. It was fantastic to see people looking at and appreciating all of our hard work. I must have stalked the table for ages, just to see the response!

On Saturday morning, before the show opened, we gathered at the display for a photo shoot and live Facebook feed with Paul, David and Michelle. Paul looked at every cake on the table and chatted to the creator (if they were there).

My heart raced as my turn approached (I hate having my photo taken, never mind being filmed!), but Paul put me at ease straight away. He loved my Santa Face and even joked that he might have to steal one of the chocolates from the advent boxes!

Later that day, I got the news that my BFG figure had been given a Silver award by the Cake International judges. I just couldn’t believe it as it was my first time of entering! 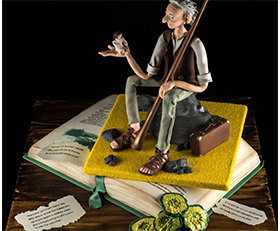 The weekend was a fantastic experience and I loved every single minute of it!  I can honestly say that I made some amazing friends through doing the Paul Bradford display. Would I do it again? Just try and stop me!!!  I will definitely be there again in November this year!

Following on from the excitement and highs of the November show, I decided to enter a personal competition piece again in the Spring Birmingham show in March 2017.  This time I was completely blown away to receive a Gold Award! 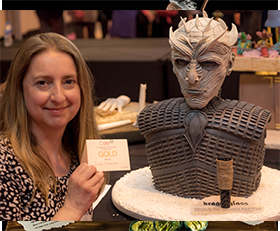 To anyone wondering if they should take part in the Paul Bradford Display Team, I would say absolutely YES! You have nothing to lose and so much to gain. I will see you there!

Julie’s Cake in a Box