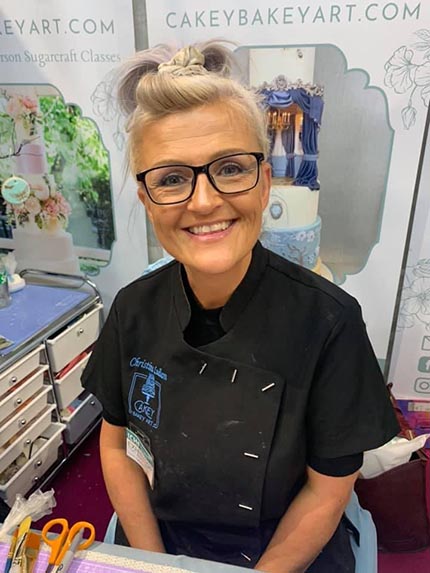 It never ceases to amaze us when we start to hear the stories behind our spotlight members.

Congratulations to Christina Ludlam on becoming CakeFlix Spotlight member for October.  This is an amazing story of someone who has been faced with more than her fair share of challenges, yet comes out fighting every time and overcomes whatever obstacles are put before her.

Christina started cake decorating in 1988 when her best friend, Mary, bought her a sugarcraft book to keep me occupied during pregnancy with my son

In 1998, she enrolled on the accredited 3-year CENTRA/ABC Sugarcraft course at Castle College, Sheffield. There was so much to juggle at the time, including breastfeeding a newborn and driving the 40 mile round trip to college. However, her persistence paid off when by the time she had completed the course her order book was full!  Christina particularly enjoyed miniature modelling and making wired sugar flowers above anything else. By this time the internet was becoming a useful tool for cake artists and this allowed research on designs and flowers meaning that with her training and the internet she could now tackle just about any order that came her way.

In 2007, Christina was working as PA to the MD of a water company, which was relocating. This meant that the family had to move house and it was on the day that they were moving that Christina felt a lump on her neck, which was later diagnosed as Hodgkin’s Lymphoma. After undergoing six months of intensive chemotherapy, in the summer of 2008, she was understandably delighted when she finally received the new, “You’re in remission!”.  After such a life changing experience Christina made the decision to return to cake decorating and sugarcraft – the one job that had given her complete job satisfaction despite the crazy working hours!  On making the decision she felt an immediate rush of excitement and couldn’t wait to start unpacking her tools.  She doesn’t even remember thinking about what Gary, her husband, would say about leaving my steady, well-paid job.

Soon after that Christina became a Sugarcraft Tutor for West Nottinghamshire College. She then went on to University to complete formal teacher training, graduating in 2011 at age 41. The learning and drive and determination didn’t stop there as Christina kept pushing and achieving amazing results.

Despite chemotherapy knocking her confidence, Christina overcame a number of challenges and became a regular on TV shows in the UK and US and in 2017 she published her book  ‘Vintage Cake 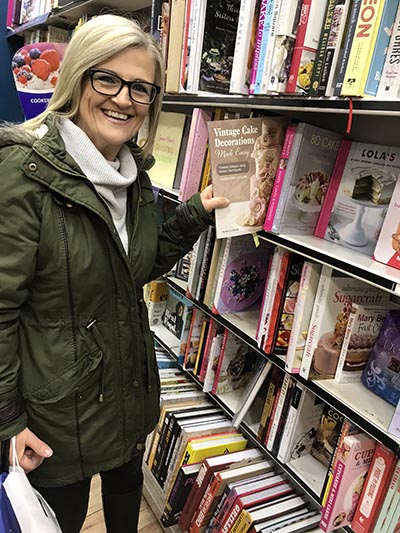 Decorations Made Easy’.  These awareness activities promoted an increase in the number of course bookings. As the house was getting very busy with classes and the children, Gary kindly created an extension where Christina could run classes completely independently of the family home. She absolutely loved her new classroom, which became a godsend as the world plunged into the effects of Covid 19.

Due to Christina’s previous condition the advice was for her to completely self-isolate. So courses were cancelled, cakes were cancelled and the effects of isolation began to hit hard. As with so many others, she felt that she was the only one struggling as the social media posts were showing that everyone else was getting by just fine. However, as we all now know, social media was showing the positive image that the publisher wanted everyone else to see, but everybody’s reality had change beyond belief and not for the better! Christina got through by creating a routine of going to ‘work’ in the cake shed, while Gary would ‘work’ on creating a garden feature. Both self employed and both without an income, it was a worrying time.

However, Christina, as before, found her inner strength and got through the challenges. One thing that helped was CakeFlix Caking all Over the World live events every Saturday. Although suffering again from confidence issues, she knew that Facebook Live events was the best way to promote herself while the isolation continued.  She lined up a couple of live shows, but it became clear that the WiFi signal wasn’t regular or strong enough to confidently complete a live demo.

Christina then spotted an advert for CakeFlix Train the Trainer course, which looked to address all the technical and confidence challenges and concerns that she had, plus there was an opportunity to feed into one of CakeFlix Live shows. With guidance from David and Paul on goal setting, camera angles, editing software and publishing, Christina was now confident enough to film and edit tutorials on a multi-camera set-up and publish to Facebook. From fearing to embracing technology meant that she had positioned herself very favourably for the future.

During the winter lockdown Christina’s daughter Grace persuaded mum to watch the Netflix series Bridgerton.  Christina just loved the costumes and period sets, which soon manifest into a cake design. Off to the cake studio she went and several sketches and dummies later she produced a jaw dropping masterpiece. Everyone online was raving about ‘that Bridgerton cake’ and several CakeFlix members among them were asking if it could be filmed as a tutorial. The answer from David and Paul was an immediate ‘yes’ so Christina started to prepare the tutorial.

Unexpectedly, Christina was stopped in her tracks when her daughter Bethany had a breakdown. As most parents would, she was left questioning why she hadn’t seen the signs and doubting herself as to the circumstances that led to breakdown. Bethany is now back on track and brave enough to speak openly about her mental health, but it knocked Christina’s confidence once more. She found comfort in a phrase David had used several times during CakeFlix Business Boot Camp, to seek ‘Excellence instead of Perfection’.  A saying that she uses regularly on herself and often mentions it to her three children and also students. The difference between an Excellent job and a Perfect one doesn’t register to many observers, but to the creator it can mean days, even weeks trying or the frustration of never achieving that unreachable goal. 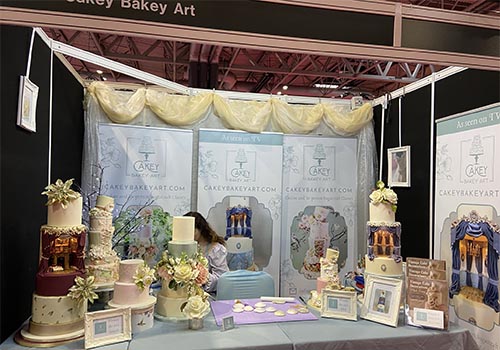 In August 2021 Christina was given an opportunity to host her own stand at Cake International. Although she had demonstrated for many of the big names at Cake International (Karen Davies, Katy Sue, Queen of Hearts Couture and Crystal Candy), she was panicking at the thought of having her own stand. After positive words of support and encouragements from David, lots of planning and a final push of 10 days working day and night, Christina was now ready for the show. She had created a new Christmas version of her Bridgerton inspired cake, complete with a sugar fireplace, sugar mantle-clock, sugar Christmas cards and, of course, a working chandelier and wall lights.  She had hand-painted holly on one of the lower tiers and made two huge Poinsettia in place of the roses used to decorate the Bridgerton cake.  She also remade a couple of the cakes from her book, after all, her book was the only physical product she was able to sell on the stand.

After a very long day and night getting set up and lots of trial and error and Plans A, B the C all being tried and tested, the stand was now ready for visitors the following morning. As with anyone exhibiting, whether its the first or twenty first time, there are always pre-show nerves. But those nerves mean that the exhibitor cares and the day to stop exhibiting is the day that the nerves are no longer there.

However, the nerves soon subsided when Christina witnessed the reaction of the public. Cameras were snapping and lots of wows, how on earth…and just a lovely warm buzz of excitement about the stand. Christina said that she felt on Cloud 9 and absolutely loved the comments and adoration. However, there were 100 reasons that Christina could have given not to take up the offer, but she took on the challenge, raised the bar and is so deserving of the comments and accolades she received.

This is just part of an inspirational story of someone who has beaten every challenge thrown her way. Read Christina’s full story in her own words via the link below.