How to Make an Egg Free Cake + Vanilla Extract

I Just want to quickly talk about the Cake International show in London which hubby and I went to in April.

We thought it was a great idea to get my beautiful step-daughter Sarah to tag along as she had never been to anything like it in her life, she was totally gob smacked by the enormous number of people visiting the show and never realised that cake baking and sugar craft was sooooo big.

She was even more surprised to see so many young people keen to learn an art synonymous perhaps, with Mum or Nana.
Being an arty person herself she loved the fabulous competition entries and was fascinated by all the different techniques employed in creating such wonders.  We dragged her along to the Paul Bradford Sugarcraft School (PBSS) stand, which as usual, was totally mobbed.

The tutorial cakes looked terrific and now she knows where the inspiration for her igloo Christmas cake came from!!  It was lovely to see Paul and David again, also this year to meet lovely Michelle Pattison who collaborated with Paul in the stunning Beach Hut Tutorial.

David and Paul are such great guys, so welcoming, so respectful and full of fun too!

Thanks chaps for putting up with me!! 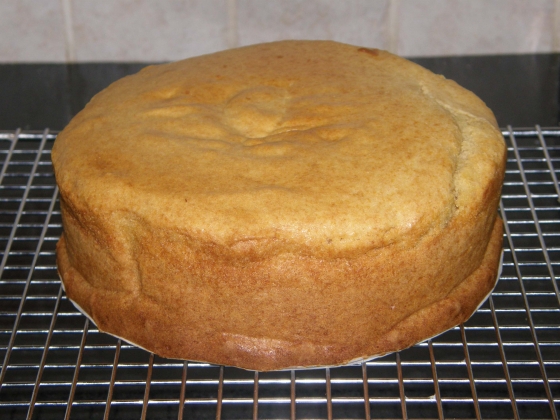 For quite some time now, a few of our members have been asking for an egg free cake recipe.
(To date I have only ever been able to recommend www.onlyeggless.com who make egg free cake mix)

By sheer luck I came across a recipe here http://www.tarladalal.com/Eggless-Sponge-Cake-108r
This recipes yields one 6 inch cake, I’ve adapted it for one deep 8 inch cake and teamed it up with white chocolate butter cream and raspberry preserve.

"This recipe uses no sugar as the condensed milk is sweet enough, but if you have too, a couple of tablespoons will suffice"

Bake at 160°c fan assisted oven for the first 10 minutes, reduce to 140°c f/a for further 35 minutes or until a tooth pick or skewer comes out clean on testing. Please do not be tempted to open the oven door for at least the first 35 minutes  (total bake time is 45 minutes or more depending on your oven) 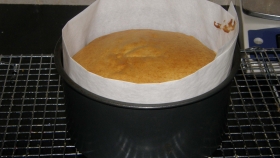 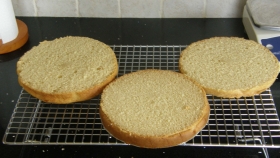 For the White Chocolate Butter Cream.. 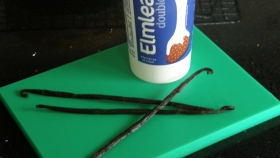 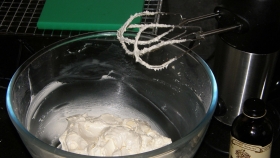 I sliced this cake into 3, it could easily be sliced into 4 or even 5 thin layers as the extra filling would give more height. My finished baked cake was 3 inches tall, filled sparsely it was 3.5 inches (we’re not lovers of cake fillings),  it would be slightly taller with normal amounts of filling. 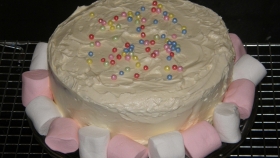 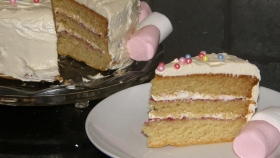 I believe the shelf life of this cake will be about three days. It could be carved, but this is best done from frozen.

I hope members will try the recipe, we've had a slice each and considering it's egg free the cake has turned out well with a good texture and taste. The absence of egg is noticeable in the lack of eggy aroma and there is a slight after taste of baking powder (which isn't surprising since the recipe asks for a fair amount).

It isn't as light as recipes containing egg but on the whole it is of more than acceptable quality. I would definitely bake it again and possibly give it a flavoured simple syrup drench, although the cake is very moist and doesn't really need it, a vanilla drench would make it more aromatic.

In coming weeks I will continue experimenting to see whether this recipe can be further refined and perhaps scaled up for a larger cake, although I'm not sure how it will work out because of the amount of leavening already in the recipe.

I do have some other recipes to look at and have a recipe using homemade egg replacer that needs some testing. 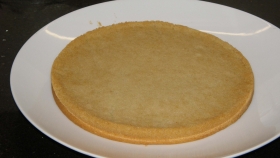 The vegan recipe cake shown in the photo hasn't worked out, I baked it in two sandwich tins and each layer has only risen to around half an inch, looks like the recipe will require a bit of tinkering.

How to Make Vanilla Extract

Finally, thought you guys would like this vanilla extract recipe.

The idea was first mentioned by PBSS member 'Freya Cobb' sometime last October or thereabouts.  I had forgotten all about it until my hubby reminded me that we had all those vanilla pods and vodka especially purchased for making the extract. I don’t know whether 'Freya Cobb' is still a member, however, a big thank you to her for putting the idea in my head.

We started our batch today.  It will be ready for Christmas when we will decanter into small bottles to give out as additional small gifts to family and friends, plus some for my kitchen too

Really good vanilla extract is expensive and most of us end up buying the standard bottle from supermarkets. But vanilla extract is very easy to make yourself. We bought our pods from www.vanillamart.co.uk. They supply quality Madagascan vanilla at a reasonable price. 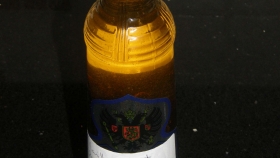 Take care all, have a great summer if we ever get one, and happy baking and decorating. xx