It’s was 2008. We are 6 years in business and just opened our 4th shop (Jenners Loch Lomond)! This was a very exciting time for me as well as David but for me to have a shop within Jenners was a dream come true. As a wee boy my Gran and Aunty Fay would take me in to Edinburgh on the train, part of the day was lunch in Jenners (The Harrods of the north). This happened most weekends throughout the summer. When I was a little older “one” was allowed to go for a wander in the huge store and have a look at the cake shop, just next to the grand hall! I remember just staring at those amazing old fashioned cakes with envy thinking one day I’ll have my own cake shop (aged 9). Little did I know I would have my cakes in these very display cabinets 12 years on…!

Anyway back to the story, we had already opened our new shop in Jenners Edinburgh and now it was Jenners Loch Lomond’s turn. I decided to make a the Louis Vuitton suitcase cake to display as the show stopper! Silly me…! 😉 But back then handbag cakes were very rare so this was a new thing and the whole copyright thing wasn’t even on the radar. 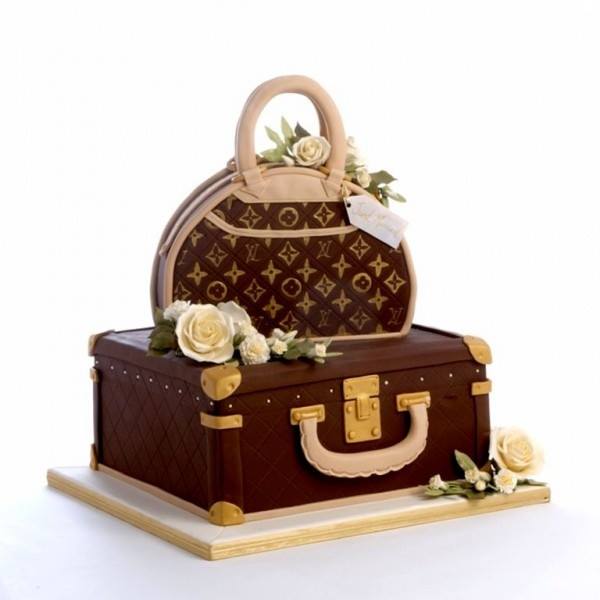 So the cake orders start coming in from the new shop and some big orders as Cameron House Hotel was round the corner with some big names staying there… and possibly the LV family! Think you know by now where this story is going…!

So I’m in the Linlithgow shop, it’s mid week and I’m opening the mail, which would then be passed to David, but I like to have a wee noisy just in case there’s a thank you card or a cheque… lol!
Just like the letter from HRH, this looked POSH and a stamp from Paris…! mmmmm I wonder what might be in this one? So I quickly open the letter and instantly see a picture of my LV suitcase cake on display in Jenners…! My heart sinks as I then see over the page the official LV water marked paper… HOLY SUGAR I say out loud WTFeck….or something along these lines…!
Dear Mr Bradford, BLAH BLAH BLAH lots of fancy words! In my “English”… You have made a cake in the style of LV handbag (they had a close up of my hand painted LV logo and a close up of their logo) then something about you must change the logo by 3 points or something like that. This is the legal team at Louis Vuitton Paris HQ saying if you don’t remove all cakes and pictures of LV cakes from your store within 48hrs we will crush you to the bones…! WELL that was not what I was expecting… Think at this point I poured myself a whisky…! I was freaking out thinking the worst, so we removed the cakes and that was that, no more LV cakes in the shop!!!! the end.

Well so we thought, a couple of months had passed and a good friend of mine, Billy, who was a little eccentric with a very colourful past, heard the story and started to shake me and shouting… phone the newspapers, PHONE THE TV this is huge! He was like ‘darling’ what were you thinking, but I’m like NO way I will get in trouble…! So “goody 2 shoes” me stays quiet…!

It’s now a few months later and I’m just back from Monaco making a massive wedding cake in the “Hotel de Paris”. While I was away David had been reading a book by a guy called Brad Sugars ‘Instant Promotions’ after reading it he thought lets post about the LV letter and see what happens (I’m not to happy, but go with it). He prepared a press release and sent it out on the press livewire, whatever that is.

The next day I’m driving to Edinburgh to deliver a cake, little did I know we were in all the national newspapers and the full page 3 in the Metro, David’s friends are texting and calling him about the headlines! I’m completely unaware at this point… then the phone starts ringing but I just ignore it as I’m driving but it rings and rings so I pull over in this lovely old part of Edinburgh with lovely old Georgian town houses there in a horse shoe shape! By this point were are now trending around the world in loads of blogs (I’m in the wee van eating sweets singing away). “Hello is this Paul Bradford”….YES this is “he” how can I help you? It’s blah blah calling from GMTV (Good Morning Britain), we’ve read your story about LV, how would you like to fly to London NOW and be on the sofa tomorrow morning for a wee chat! In my head I start panicking thinking LV will be mad! Em ehhh emmm No I can’t sorry I’m too busy I have cakes to make!!! Goodbye (I now wish I said yes).

So I get straight on the phone to David for him to say hurry up and get home the Scottish and BBC news were on the way to the shop for an interview… OMGoodness what’s happening!
Anyway as you can imagine it was very exciting the headline was “Louis Vuitton vs Small bakery in Scotland” or “Fake Bake Bag” or “LV feel threatened by little Scottish baker” and another “David v Goliath”. Well this was the best publicity money can buy the phone wouldn’t stop ringing people wanting LV Handbags we were even on the LV unofficial blog next to the post about the new opening of their Paris shop!!!! ***It’s was CRAZY***

So THANK YOU to the person who saw the cake in Jenners for all we know it might have been another cake shop or really was someone from LV , who knows! This was the best PR ever so, old Billy, sorry for not listening and thanks to Brad Sugars and David for having the balls to post the story!

Below is the real cake from Jenners which was almost 9 years ago since it was made! The press being the press posted the more colourful handbag that they pinched from the website! But who cares… the end. 😉 Px