A Sweet Ending to a Very Sweet Event

This September saw me winging my way to the OSSAS in Tulsa Oklahoma, following an invitation from Kerry Vincent to be one of her presenters at her sugar art show, an honour indeed. I’ve been involved in the show now for four years and regard it as one of the premier cake shows in my diary, something I wouldn’t want to miss. The show consists of many competition categories, but of course the one category everyone wants to win The Grand National Wedding Cake competition. 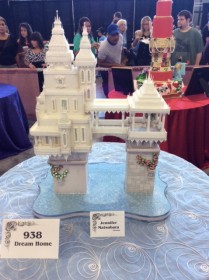 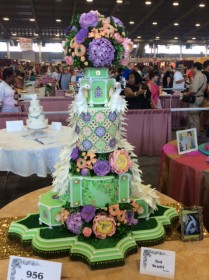 I arrived on the Monday evening, four days before the show because when you’re building a five tier wedding cake, in front of a crowd of cake decorators, then you need to be prepared and prepared I was going to be. That good old friend of mine jet lag played havoc with me during the week of the course and I was often found in my hotel room at 4.30am piping royal icing roses and off pieces. Humidity was also no friend of mine because I must have broken more off pieces than I can count before I finally had everything ready for the show opening on the Saturday morning. 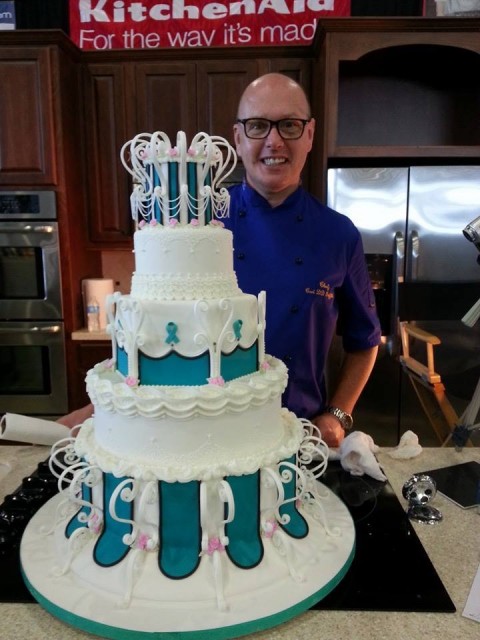 Setup day for me was Friday afternoon and it was only when I was standing in my presentation kitchen did the enormity of what I was about to do hit me, I was at one of the top cake shows in the world and I was one of an elite group of presenters, only forty people over the previous twenty years had done what I was about to do….no pressure then. Facing the banks of seating I took a deep breath, told myself to get a grip and unpacked trying to block out all of the noise around me.

With setup done I had a chance to catch up with friends old and new, some of whom I only see once a year at the show, my intended early night and good sleep
didn’t happen, because I’m just a little OCD I spent most of the night checking and double checking things in my mind, I was up before the sun and determined that I was ready.

The next two days were a blur for me as it felt as if I had jumped upon an express train. Over the two days of the OSSAS I piped for about eight hours,
completed a five tier wedding cake coloured teal, black and white to bring awareness to Ovarian Cancer Australia to whom the creator and host of the OSSAS Kerry Vincent is the spokesperson. Judging by the crowd’s reaction I was a success, my cake was photographed for an Australian magazine article to go out next year and it was over. 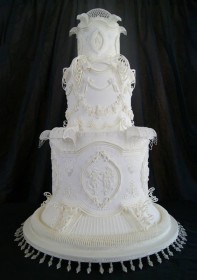 The most touching thing happened to me at the end of the show however, I was approached by another cake decorator who had gone through a rough time health wise over the past few years and was a double amputee, losing both her feet from the ankle down. She asked what was going to happen to my cake, unfortunately as I wasn’t able to bring it home it was to be thrown away, the horror on her face told me immediately what her next question was going to be and I obviously said yes, she could have the cake if she wished. When the cakes entries were being packed up I carried my wedding cake over to her where she was packing up her own wedding cake entry, at this point I asked what her intentions were for my cake, she told me that it would be put on display in her shop and photographed for the press as she intended to share her story of cancer survival with the world and my cake would be seen by the readers as a celebration of her victory.