Upon arrival in Brisbane we were met by the Bake Boss, boss, Scott Noble and taken to our hotel in downtown Brisbane.

We dropped off our bags at the hotel, and then – as with most good business meetings – we met in the bar and shared a few beers. We went out to another bar just around the corner for some food, followed by a few more drinks then returned to the hotel where we found the bar was closed. Paul went off to his bed, but Scott and I enjoyed some drinks from the mini-bar at the hotel library, the only public area still open. I must admit, it’s been the first time I’ve been in a library for a very long time!

The next day was Paul’s first demonstration of the tour at the Gold Coast, which was just over an hour away. However, we had plenty of time so Scott took us down to the riverside where we had great views of the city, it’s bridges and some beautiful walks. 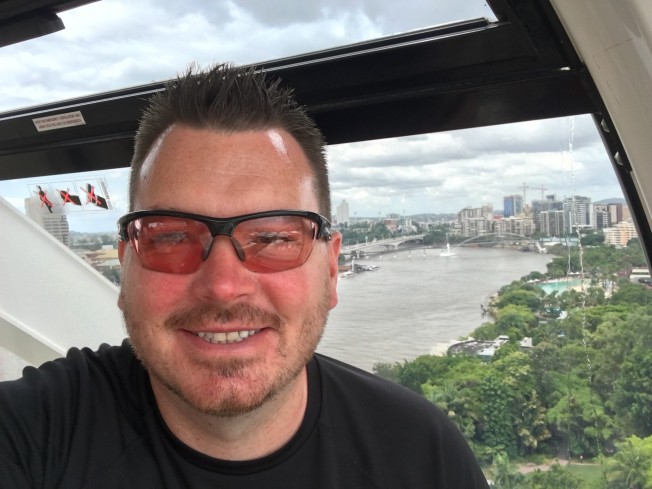 We took a trip up the Brisbane wheel where we enjoyed an elevated view and, as it was a lovely day, we could see for miles. We then took a wander along the river’s edge where we saw a beautiful and popular inland beach, before taking a river boat ride and got back to the hotel in plenty of time to get ready to head down to the Gold Coast. 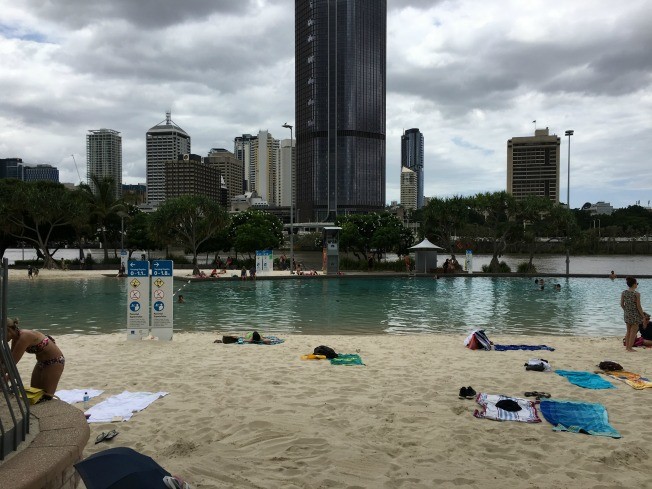 En route we stopped off at the Brisbane store at Underwood and were blown away with the size, but more on that later. Arriving at the Gold Coast store we were met by manager Amanda and her team, who were all lovely, bubbly and so passionate about the business. We also met the amazing Michelle, who manages the North Lakes store, which was next on the tour.

The Gold Coast shop was amazing with the classroom and kitchen on a lovely mezzanine level with a huge shop space below. An Aladdin’s cave for any cake decorator with a huge range of over 5k stock items.

Before the demonstration started Scott took us down to the coast itself, passing over a number of lovely waterways on the way. Beautiful as they were, there were dangers under the surface with a number of bull sharks spotted in the area. We had just enough time to get onto Surfer’s Paradise beach – and with a title like that, it needs no introduction.

Then it was finally here, Paul’s first demo. As the crowds gathered so did the butterflies, but all the stock and logistics were checked then double checked and we were ready for the off. You’ll get a better idea of the store’s size and space as Paul introduces his first demo at the Gold Coast store.

The demonstration went very well with lots of laughs and after the demo the audience were all wanting pictures and autographs with Paul, which he was lapping up and enjoying every minute.

This picture shows Paul with Toni O’Grady, one of Paul’s biggest fans. They were both so popular that I was shunted off to the side while everyone else was grabbing a snap of the happy pair.

We were then treated to a lovely meal followed by a couple of drinks, but Paul stayed sober to drive us back to the hotel.

Next day we were picked up by Michelle and taken up to the North Lakes store. It was another fantastic day with clear blue skies and a slightly oversubscribed demo, but everyone just got up close and personal. Here’s Paul’s Facebook live entering the Sunshine Coast – North Lakes store.

Every store manager was hugely passionate, but with Michelle there was something else that I struggled to put my finger on. Perhaps when I tell you that she burst into tears after cashing up after the North Lakes demo, breaking her record sales in one day, it might help you understand the depth of her passion.

Our final stop in Queensland was a trip back to the North Lakes store, which was to the south of Brisbane. Another huge store with a great training facility on a mezzanine level, where we were met by Melissa and her team. There was a huge shop area with even bigger warehouse out the back, something I’m sure many UK cake businesses would be so envious of.

It was another superbly organised event, with Michelle and Amanda both present to help along with the planning, laughing and creating a great fun atmosphere. There was also the lovely Kerrie, who was a huge help with the cleaning and tidying at the Gold Coast and Underwood store.

This photo is Paul giving his introduction at the Underwood store.(Michelle on Paul’s left, Melissa far left and Amanda on his right, Kerrie far right).

Then it was an early night to prepare for the following day’s flight to Perth, which would be another time change and a 6 hour flight straight across the centre of Australia…