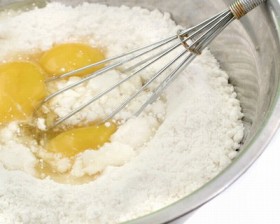 Our very own ‘madeitwithlove’, has been extremely helpful in answering many baking questions posed on our Q&A section and now kind enough to take the time to write a blog on her experience baking cakes, which makes very interesting reading….

I learned to bake as a tiny twelve year old at school, in what appeared then, to be a massive kitchen come classroom. Teacher was a harridan when it came to following ‘HER’ recipes, and woe betide you if you waivered from her instructions! I hated domestic science classes with a vengeance, especially since in those days we had to beat all cake ingredients in a bowl with a wooden spoon. The school of thought at the time was to have all the ingredients straight out of the fridge, to cream solid block margarine with sugar for a mere weakling like me was a daunting task. Years later, I began to appreciate the harridan’s constant nagging, and I wished I had paid more attention! Although thankfully today we have our ingredients at room temperature and have the assistance of marvellous kitchen aids.

I have never been what you might call an ace baker, other people however, for some reason, laud my efforts and I suddenly find myself having many, many friends, (I wonder why?). Throughout my baking journey, I’ve made, and continue to make, hundreds of mistakes in the endeavour to baking the perfect cake! (believe me, it doesn’t exist!). What I have learned however, through scrimping and saving snippets of information, is why certain things do go wrong, and I thought it might be fun to share.

So guys, if the recipe has been followed pretty much closely, ingredients weighed, tins properly greased and lined, the oven preheated and set to the accurate temperature, you’d think great! the cake will be baked perfectly. This is not always so, the most common complaints and  frequently asked questions after all that hard work are as follows:

My cake has sunk in the middle!  What happened?

Most common reason is when the oven door is opened too soon and the cake hasn’t set up and baked properly. The mixture could be too soft due to not enough ingredients or if there is too much liquid added. Using too much raising agents can make the cake rise too much too quickly and it implodes on itself.

My cake has got a dome bigger than St Paul’s Cathedral!!

Cakes which dome or peak and crack are usually as a result of the butter and sugar not being creamed together for long enough. Give the ingredients a good five to seven minutes of creaming, this incorporates air into the mix making it light and fluffy. Baking in too small a tin restricts the expansion of the mix, so up it goes and pops!  Also baking  too close to the top of the oven will make the centre rise before the sides have had a chance to catch up. However, it is natural for madeira cake to dome and crack.

Now my cake is too dry

Maybe you’ve over baked it, or didn’t use enough liquid/ not enough eggs, if the recipe says use large eggs and you haven’t got large, use an extra egg, size matters! Using too much raising agents will also make for a dry cake.

Got holes in my cake

Again the culprit is not enough creaming, this time sugar, eggs and butter/marg. Oven temperature too high and too much baking powder will also cause holes and an uneven grainy texture.  Add eggs into creamed butter/sugar mix one at a time,  cream well so the mix is smooth and incorporated.  If the mix starts to separate add a tablespoon of flour with each egg. The rest of the flour should be carefully folded in with a large metal spoon so as not to lose any of the air in the mix.

Why should a cake be heavy with a closed rubbery texture?

Over mixing cake batter can result in a heavy, closed rubbery texture. Over mixing acts on the gluten in flour and will make cakes hard instead of the lovely soft spongy texture we associate with a good cake. Insufficient  creaming of sugar and eggs will also make a tight texture because there isn’t enough air trapped in the mix to give it a lift.  Adding too much liquid will make it dense and pudding like.   Genoise sponge will become heavy if the melted butter is too hot when added and if it is not folded in evenly.

This is usually an indication that sugar and fats have not been adequately creamed but it may also be caused by using granulated sugar which doesn’t dissolve as well as caster. Too much sugar in the recipe can also make a sugary crust and speckling on the top, in which case try reducing the amount of sugar by approx 60/70 gms. I’ve done this without compromising the quality of the cake. In fact, I forgot to put any sugar at all in one of my chocolate cakes,  it didn’t rise but was perfectly edible with a dash of liqueur and a dollop of clotted cream!

Last, but my no means the least is the fruit cake which has it’s own problems. As with all cakes, the methods of incorporating ingredients into fruit cakes is the same, the only difference being that fruit should be of good quality, washed and dried if the recipe asks for this, and sticky fruits such as glace cherries, and angelica should be washed, dried, and floured before adding to the batter other wise they just sink to the bottom. Dried fruit can be plumped up by soaking overnight in a couple of tablespoons of liqueur or warm water. I soak dried fruit for three days, but that’s personal choice.  Adding too much liquid to fruit cakes can also result in the fruit sinking to the bottom and can cause a creamy wet stickiness to the baked cake which can’t be remedied. Following the recipe and a little common sense will pay big dividends. Different fruit cake recipes have their own method of how to bake. Some will advise baking at a higher temperature for the first hour and then reducing the temperature for the remaining baking period. Others will bake at an even temperature throughout the bake time, this advice should be adhered to for a successful result.

Obviously these are just a few things which can go wrong in cake baking.  Most mistakes can be remedied, but in my book there is no such thing as a baking failure, just a learning curve. More experienced bakers will have come across all these problems through their baking journey. For the less experienced baker, those who are starting out, baking can be a mystery and some disappointment is inevitable. Baking is a science, ingredients all have an interactive role to play although small discrepancies in weights and measures won’t affect the overall quality of your baked creations, it is advisable to follow recipes accurately and enjoy your baking!