In case you haven’t heard of Free Cakes For Kids here’s a little bit about what they do. Free Cakes For Kids are a community service to families in the UK who find it difficult to provide a birthday cake for their child. This could be for a variety of reasons such as illness, low income or family circumstances. They receive referrals from partner organisations such as local children’s centres, food banks and young carers groups. There are about 60 groups across the country now. All cakes are baked 100% by volunteers, who operate locally and independently in their own private kitchens.

Up until about 7 months ago I hadn’t heard of them and had no idea that such an organisation existed. I found them purely by chance. I have been a hobby baker for a few years (pretty much just makes cakes for my nieces and nephews) and had decided it was something I wanted to do more of. With this is mind I started making cakes to practice decorating and to be honest got fed up of eating them (my kids and partner didn’t mind that part) or throwing them away (I thought a dummy was just what you gave to babies to stop them crying). So I went online to see if there was anywhere locally that I could donate my cakes to. This is when I found my local Free Cakes For Kids group. As a hobby baker I was worried that I wouldn’t be good enough for them to take me on as a volunteer but when I contacted my local coordinator she made it very clear that they are not necessarily looking for professionals to make these cakes just people who like baking and care about children in their community.

So I signed up straight away. When the first referral email came through I put my name forward and then panicked when I was asked to make the cake. I had never made a cake for somebody that I wasn’t related to before and let’s face it what your family tell you is a good cake isn’t necessarily a good cake! All I knew about who the cake was for was their name, age and the fact that they liked Man Utd (being a Chelsea supporter this was a hard cake for me to make). I made a football shirt cake with his name and age on and was shaking like a leaf when I was delivering the cake to the coordinator. The fact that my cake could make the birthday of a child who I’d never met a little bit more special was quite overwhelming but extremely rewarding at the same time.

Then after a few months of volunteering with them we all got an email that a coordinator from another group was trying to organise a collaboration piece to display at Cake International. I have been to Cake International many times before and the thought of showing some of my work there whilst raising awareness for what we do was too much to resist. There were lots of people from other groups interested too. So through the power of Facebook the idea of the Kids Party Table came about, we thought to make it a bit more fun we would make it like the messy table at the end of the party. Everybody put their names down for what pieces they would like to make and then last Friday we put our table together. The result was incredible, to think that all these people who had never met, never even had a phone conversation could produce such an amazing display. You would have thought that we had all sat next to each other making this pieces to have it all come together so well. When we turned up on Friday morning we had no idea that we had actually been entered into the competition and were going to be judged. So to then find out on Sunday that we had received a Gold Award for Best Group Display was incredible!!!!!!! It just shows you what a group of like-minded people who care about people can achieve. 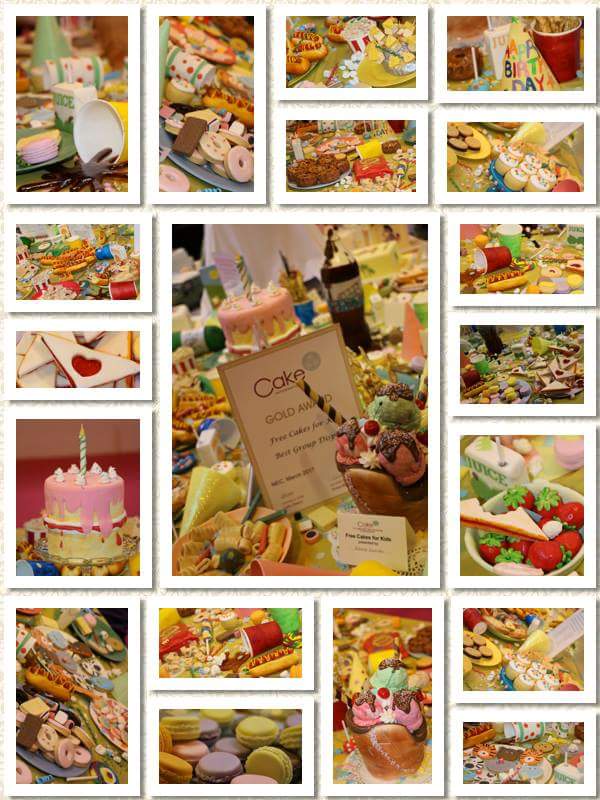 They have already been lots of new enquiries from people about how to volunteer and requesting information on their local groups but there is always room for more. So if you like baking and care about your community and would like to make a child feel extra special on their special day then please go to www.freecakesforkids.org.uk to find out more.