Partnership with Tolle Torten in Cologne 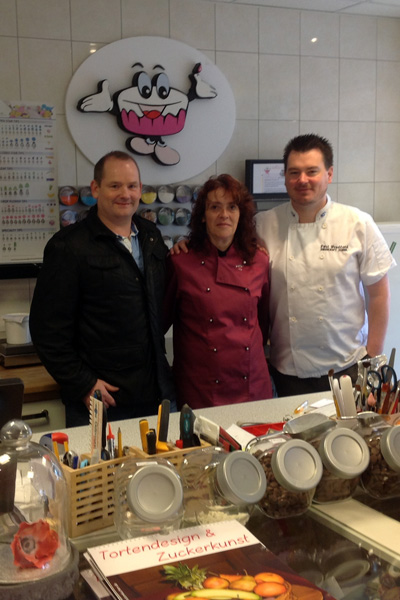 Having taught in many countries before this was Paul’s first venture in Germany. Catching a 6 am flight from Edinburgh meant a 3 am alarm and thankfully the roads were clear for a quick sprint along the M8. That wasn’t the end of the sprinting as the change at Amsterdam allowed only 20 mins for the transfer and as luck would have it the flight to Cologne was departing from the furthest most point from where we arrived. As we ran toward the departure gate we could hear our names being announced over the tannoy, but thankfully arrived just in time, if a little flustered, to catch the flight.

When we arrived in Cologne we were met by Alix, who works for Marion and Martin at Tolle Torten, who spoke great English and within 5 mins we were have a laugh and joke so the ice was well and truly broken. Unfortunately the weather wasn’t great, but we headed into Cologne and took a quick tour of the Lindt Chocolate museum and stopped off for some lunch. Well that was the plan, but we couldn’t understand anything on the menu, but of course Paul had quickly learned the German for ‘chocolate cake’ so he had a smile on his face when this mountain of a cake appeared – delicious. After a tour of the huge cathedral we made our way back to the shop to be taken to our digs.

Saturday had students making the Designer Handbag cake and with 12 students sharing one fridge thankfully mother nature did us a favour so we sat the cakes outside to allow the ganache to set quickly. Another trick from the master of improvisation. Sunday was the Jimmy Choo shoe and thankfully the clocks going back allowed an extra hour in bed after an evening of excellent German hospitality. The cakes were amazing and everyone was delighted with what they had produced so much so that many didn’t intend to cut theirs.

Students had come from all over Germany and one lady had come 700km from Austria. All thoroughly enjoyed the course and Paul made some great friends over the two days. So much so that Marion was keen to get some dates sorted out for 2013 which have now been agreed as 25th, 26th, 27th July 2013. The Dragon, Jimmy Choo and Handbag seem to be the sought after courses, but are still subject to final confirmation.

We all got on so well that we have arranged that Marion, Martin, Beade and her husband come to enjoy some Scottish hospitality in Kenmore. Hopefully this will be arranged for early next year and who knows there could be a video or two from Marion and Beade.

Great people, great trip and with Tolle Torten now expanding to much bigger premises with a dedicated classroom, shop and production area things are just going from strength to strength for them. They recently introduced franchising which has proven very popular.